Signs are usually brusque, devoid of humour or humanity –  rather like a sergeant-major’s barked commands to a nervous squad of raw recruits – LIFT….DINING ROOM ….TOILETS …BAR….SWIMMING POOL……SHOP…..SLOW DOWN….. TURN LEFT….. LEVEL CROSSING … EDIT…ADD MEDIA….. PUBLISH…. VIEW POST…… CLICK HERE….. STOP..
It comes as a pleasant surprise therefore to find signs that by their form and style amuse and surprise and entertain:

A very ironic johnknoxy sign seen in Edinburgh outside the Modern Art Gallery. It reminded me of the  archetypal Scottish joke ……On Judgment Day. as  the souls of the damned were whirling through the abyss down into the all-consuming  flames of hell, they cried out, ” O Lord, we didnae ken, we didnae ken!” and in response this mighty voice from above boomed out, “Weel,  ye ken noo!”

but on the other hand……a cheerful and jaunty reassurance above the entrance to the Modern Art Gallery – I think both signs are the work of Martin Creed whose good-natured philosophy is very binary or dualistic or whatever.

A polite apocolyptical global warning sign in a student kitchen…… 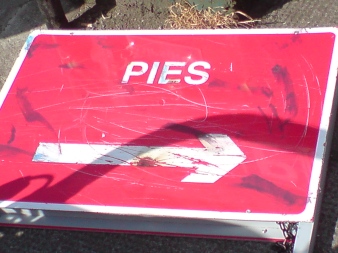 A very Scottish sign seen in Glasgow’s Byres Road. Scots are addicted to pies. And bridies. There is word that a left-handed bridie is being developed in Forfar with the thumb-hole in the pastry casing placed correctly for a left-handed grasp.

A wonderfully creatively welcoming door in an Amsterdam hotel which believed in giving the place personality, soul, a sense of humour, human warmth

The Conscious Hotel, the same surrealistic hotel whose doors  give you such a warm, poetic  introduction to  Amsterdam. ” Your breakfast is 100% organic and there are plenty of healthy choices but we won’t force you to survive on nuts and berries. At Conscious hotels, you make the choices that are right for you. Except for wearing socks with sandals. Then we might say something..”
Or as Saussure famously said: “In language there are only differences. Even more important: a difference generally implies positive terms between which the difference is set up; but in language there are only differences without positive terms. Whether we take the signified or the signifier, language has neither ideas nor sounds that existed before the linguistic system, but only conceptual and phonic differences that have issued from the system. “