THE BOY WHO FELL FROM THE SKY

Daedalus stood at the window,
stared down on  the wine-dark sea,
at the white-sailed ships with somewhere to go,
at the sea birds flying free.

Icarus looked up at his father,
watched him sawing wood
then helped to sweep up the white sawdust
like a good son should.

What’s in that pot on the burner?
What do you have in these sacks?
Why are you carefully sticking those feathers
one by one into that wax?

Father, what toy are you making
with wood and feathers and glue?
And why do you work here all the day long
and half  the night too?

Why do we work for these people?
Why have  they locked our door?
Why can I never go out to play
with the children on the shore?

Daedalus stood at the window,
stared out at the clear blue sky
and the birds that passed all flew in from the left.
He felt his mouth go dry.

Fit your fingers into the canvas.
Spread your fingers out wide.
Now lift your arms up to your shoulders.
Now sweep them down to your side.

He led Icarus up to the turret
that towered over the town.
Watch what I do then you do the same.
My wings won’t let you down.

These wings are the best I’ve ever made
but my skill can be undone.
We must fly low.  We dare not go
too close to that blazing sun.

Daedalus stood poised like a diver.
Like a diver he fell through the air
and the air let him fall through its fingers
as if it didn’t care

till his wings stirred and some  invisible force
carried him over the town –
the slightest movement of his arms
sent him up, or sideways, or down

and Icarus flew right behind him,
laughing his joy out loud
for the air felt safe as houses
and his body light as a cloud.

The gods were alerted by  Minos shouting,
cursing, tearing his hair
while the boy and his father,  too clever by half,
trespassed through his air.

It only takes a second;
it catches you unprepared –
first the impulse of joy and then the act,
the deed  that can’t be repaired.

The careful work of a lifetime
in a moment is undone.
Wisdom ignored,  Icarus soared
up to the golden sun.

He did not hear his father’s cries
nor see the red wax run;
he did not see the fragile feathers
drop off one by one.

Where was the dolphin, the sailor’s friend?
Where  the ship? the look-out’s  cry?
Why did everything turn away
from the boy falling out of the sky?

A splash of white starred  the wine-dark sea
and Icarus was gone.
The gods had other things to do.
His father flew hopelessly on.

Why was no rescuing eagle
summoned by  a simple nod?
Which of us would not have saved him
if we had been a god?

It’s a little known historical fact that Julius Caesar was an avid Man U fan while his pal Brutus was a dyed-in-the-wool Gunner which was okay until they and their gangs  bumped into each other  in the Forum after the match. It was no doubt some political problem that started things off but when it came to football,  reason flew out of the fenestra altogether.  Caesar was stabbed. The whole sorry affair is recorded in more detail by William Shakespeare who reported that defiant to the end, Caesar’s  last words were, 8-2 Brute.

In the once-thriving city of Dundee

striding purposefully along for all to see

is this  eccentric, comic-character,  local man

desperate, they say,  to get away

from this city  famous for its poets beside the river Tay

the most beautiful, flower-bedecked place on earth –

which is only thirty five or so miles away

along a picturesque if busy motorway

that runs alongside  the silvery Tay

which flows from Perth to Dundee every day

and where he hopes that his enjoyment

will be added to by the chance of gainful employment.

Until then, he’s worth a visit if you’re passing nearby.

Here he is eating his favourite –  cow pie. 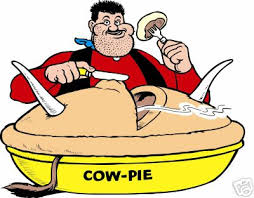 doctors nowadays aint what they used to be

When I was younger, doctors were respected figures in our (admittedly ‘small’) community. They went out of their way to establish a personal relationship with patients. They understood our anxieties , gave us their undivided attention. And being cultural leaders in our community, they had heard me play and, I think, respected my musicianship. Now I find the profession full of smart-assed young whipper-snappers who do not give a hoot.

Today I asked the young doctor who was doing the rounds if I would be able to play the cello quite soon after my operation ( rheumatoid arthritis of the wrist).

Only if you could play it before, she said without even looking up from her clipboard.

There had been a botched terrorist attempt at the railway station just before we arrived so naturally everyone was a bit on edge. Jumpy. Trying hard to relax. Laughing too much and too loudly perhaps. Drinking too much certainly.

But  sure enough the sun and the luxurious setting began to do its work.  Real laughter.  The friendly clink of glasses as new friends were made. Cheers. Salut. Prost. Slainte mahath. Skal.The smell of ambre solaire in the air.

So. One minute we were all fooling around in the hotel pool, having fun, keeping cool, showing off a bit maybe then

Out of the blue.

Stopped in their tracks.  .

Gape-mouthed. Where? What? Who? When What the….

A boy had just fallen out of the clear blue sky into our swimming pool. Fortunately at the deep end which as usual was pretty empty. Come to think of it, not a big SPLASH either, more a sort of ssssplllup, the sound of something/someone cutting cleanly into water with minimal resistance/turbulence, a bit like that marvellous Tom Daley child doing one of his unbelievable high-platform, triple-jack-knife effortless efforts.

Meanwhile, downtown, in the market place, the woman with blue hair was watching carefully (as careful housewives do) while the fishmonger sliced through a chunk of tuna for her ( If you double-click or whatever to enlarge the picture you will see that she is not exactly a barrel of laughs, this woman with blue hair).  However the centre of attention here is not the blue-haired lady – that’s another story – but Mr. Daedalus, the solid-looking fishmonger who is better with fish than with people, who has no idea where his son is at this particular moment nor even the hope that he’s not up to any mischief.

That Icarus! the blue-haired lady would have told him. One word from you and he does as he likes

What a country!
Pontedeume……Oviedo……Lugo…..Caceres…….Santiago…. Pontevedra …… Malaga……Pamplona…..Oviedo……Vigo….
I was only there for a year but I’ve such fond memories of so many places.
Vigo
Who was the guy who fiddled his way through Spain? Landed at Vigo with a violin and great expectations? Mmm  L-something… Lionel?..Leslie?…. nope. Gone. See my memory? The name’s departed, flitted off, no longer accessible.

Anyway, what was I on about? Ah yes. Czechoslovakia. Whatever happened to Czechoslovakia? There was a civil war, I remember that much though between who I’m not so clear about. Should that be ‘between whom’? And should it be ‘about between whom’ (you can’t end a sentence on a preposition)? But can you have concu –
One thing I remember though: when I was 15, in France, on the Seine, a wee village called……..anyway I had learnt to swim there and with all the confidence of teenage youth I struck out to see how far across I could swim. But along came one of these long sinister wave-making barges. A wave broke over my head. I tried to clear my nose. I went under. When I got to the surface I tried to swim back to the shore. Unfortunately I had forgotten how to swim. Then I was breathing water. Then air. Then water. Then more water.
And then I remember opening my eyes to see this circle of bright faces looking down at me. Angels. This is heaven, I thought. I have drowned and my mother is going to be so upset. Then what had happened came back to me.
“Ou suis-je?” I asked, very correctly (Miss Yule would have been proud of me).
Two guys, fortunately good swimmers,  had seen my plight and dragged me ashore.
Yes, I remember all that as though it was yesterday. But it wasn’t yesterday. It was ………..years ago. Dear god, long long years  ago!
Anyway, where was I? Ah yes, Laurie Lee, the ‘Cider with Rosie’ man. But what was the book called, the one about his trek through Spain? He landed in Vigo, with a violin and all the confidence of youth and a way with words as well as with notes. But what was his book called? ‘Travels with a Donkey’ , that  was Robert Louis, but what was Laurie Lee’s book called?
Do you remember?

I suppose I’ll have to google it. Now how……

a bucket and spade

and the the sea, the sea,

is all she needs

Oh I do like to be beside the seaside

To be able to do

The people along the sand

all turn and look one way.

They turn their back on the land.

They look at the sea all day.

They cannot look out far,

they cannot look in deep

but when was that ever a bar

to any watch they keep?

Amelia was so beautiful I was afraid to let her out of my sight in case I should lose her to some passing Romeo who would give her his mobile number scribbled on the back of  her hand while I was hailing a taxi or to some smooth talker who would calmly plonk himself down in my seat while I was in the toilet and turn her head with his foxy gift for words.

Months passed and then one day she said, We can’t go on like this.

Like this, she said, lifting her arm up so quickly that the handcuff bit into my wrist.