and I feel like asking Is it all right for me to read them?

I feel like heading my own posts with something along those lines – if you want to plagiarise or cannibalise any of what follows,  feel free and thank you for showing such good taste

a line of waddling ducklings –

which had strayed behind

rushing to catch up

on  the tree top,

and to complete the scene

me watching  it all

through the kitchen window

plate in one hand

dish cloth in the other,

Shall I compare thee to a summer’s day? and other  such questions

was  a problem even for ginger rogers and fred astaire

a question for which these fabulous dancers

what to do once you’ve stopped dancing

well all i can say

is that if  they

such a skilful pair of dancers

what sort of chance have i?

i  try again then…

but you know what?  Having climbed the mountain,

having reached the peak, what is there left to do but descend?

Don’t know but do it now!

hakuna matata. Whatever you say.

There we are! How’s that?

A relatively recent and totally welcome addition to the Forfar town centre is the 88 degrees  (thought to be the ideal temperature for a cup of coffee).
Which brings to mind the temperature issue raised in 1994 by one Stella Liebeck  against her local Albuquerque  McDonald restaurant……she had ordered a cup of coffee from the drive-through window (she was in the passenger seat of her grandson’s Ford Probe).
He parked the car so that she could add cream and sugar to her coffee. She placed the coffee between her knees and pulled the far side of the lid towards her to remove it and spilled the coffee into her lap, scalding her thighs and buttocks and groin.
When the case came to court,  the jury decided  in Mrs. Liebeck’s favour, finding McDonald’s 80% guilty.  Consequently in  she was awarded a very thick wad of dollars in compensation.

So the correct temperature of your cortado, cappuccino, americano,  machiatto, doppio, turkikos, latte, or whatever  is not simply a matter of taste. But it’s nice to know that cafes exist which are specialist enough to know about such matters.
And the 88 makes  its own chocolate. 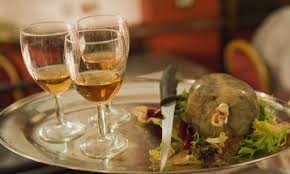 Not many Scots eat haggis   –  it’s a sort of joke to go along with the deep-fried Mars bar but it can taste pretty good when eaten along wi mashed neeps an tatties and washed doon wi a  golden single malt such as Talisker or Highland Park  or 12 year-old Glenfiddich on Burns night:

However not the heralded haggis, not the disappointing Forfar bridie, not the ubiquitous sausage roll but the mutton pie is the most commonly scoffed item of Scottish cuisine. Most butcher shops have wee stickers in their windows proudly claiming that their Scotch Pie won the gold/silver/bronze award at the Scottish Pie championship held in Auchtermuchty, Methil, Tillietudlum. 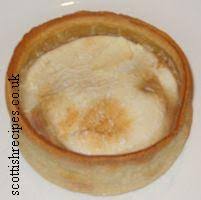 The top award in The Scotch Pie World Championship 2012 held in Dunfermline was won by a butcher  from Dumfries and Galloway.

A sign in Glasgow’s Byres Road. An average Scotch pie contains 1ooo calories and when consumed at a football match washed down with a plastic cup of Bovril considerably more. The right size and shape for an al fresco snack, it has become a staple item for shoppers who like to gaze and graze on the hoof.

The legendary Desperate Dan who stepped out of Greek mythology (known there as Herakles or Hercules in the Roman version) into the Beano then onto the High Street of Dundee had as his only known sustenance, Cow pie,  which gave him the muscle and energy to perform such amazing feats of strength. 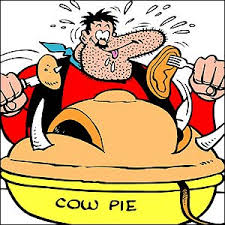 McDonald..mmmm – definitely a Scottish name – could it be that the Big Mac, the ubiquitous hamburger,  is really an Edinburger?

I went for a week up to Stromnes, George MacKay Brown’s wee town and was quite taken over by it. The photograph above  is looking across the harbour to the Pier Arts Centre (between the red building and the white house) which opened in July 2007 after a 2 year, lottery-funded redevelopment. It sits on one of the many piers that characterize Stromness. The original  buildings and pier once housed the office and stores of the Hudson’s Bay Company.  It all looks good on a day like this

and just as good at night.

Then  back to Dundee. No real exercise for a fortnight. At the Sports Centre a woman with red stockings  and gold shoes caught everybody’s eye. I do 45 minutes on a variety of machines while a guy who was on the treadmill when I arrived is still there, still treading as if the world would stop turning if he did.

This is the rear view ( more attractive than the front view) of Dundee University’s  Dalhousie Building.  I quite like its bigness and redness.

A quick trip back to Orkney for the music festival. Flattie’s Bar, Stromness. A red bus and a blue flapper stop outside. Inside it’s packed to the rafters with fans and fiddlers and you talk to anybody and everybody (when it’s possible to hear and be heard). I nip over to Rackwick bay in Hoy  and talk to Jack Rendall who must be Hoy’s senior resident and his wife who runs the local museum. On the way back I ask the ferryman if he knows the Rendalls. He looks at Hoy receding in the distance and says, “A dinnae ken ony o thae hillbillies.”
Then it’s back to Dundee for work and some  sleep.

This is a view from Dundee’s landfill area across the Tay to the kingdom of Fife, a popular walk for dog owners as the red box might suggest. I have no dog  alas alas.

and a PINK rose in a glass which my love is like.

And finally a romantic goldish bluish PINKish sunset over windy Lanzarote as the world waits for the big round miracle of the moon to put in in its usual appearance  (but perhaps one of those nights……..)

It’s high time I did something.
But at my back I always hear/time’s winged chariot hurrying near….
Time is of the essence (what exactly does that mean?)
Time, gentlemen please, time (as they used to proclaim in pubs at 11pm in the old days)
Do you have the time? (if not the inclination… )
One upon a time (or once below a time, to quote Dylan Thomas )
There is a time to be born and a time to die, a time to fail and a time to try, a time to smile and a time to sigh (and so on).
There is a tide in the affairs of men which taken at the flood leads god knows where
Time was when I could run a marathon before breakfast
There’s a time and a place for everything and now is not the time and this is not the place
How time flies when you’re having fun (usually said sarcastically).

What are days for?
Days are where we live.
They come, they wake us
Time and time over.
They are to be happy in.
Where can we live but days?

Ah, solving that question
Brings the priest and the doctor
In their long white coats
Running over the fields.

In 1748, Thomas Gifford, a wealthy landowner and merchant, married to an ambitious wife and with 14 children, including 4 sons, must have felt his patrimony to be secure. His eldest son, John, aged 30, should by now have been married with heirs of his own, unfortunately he had eyes only for his orphaned cousin, who lived in the house as a companion to Lady Gifford. Her name was Barbara Pitcairn. The Giffords were resolutely against so unsuitable a match for their heir, Lady Gifford going so far as to tell a friend she would rather see John dead at her feet than married to ‘Babbie Pitcairn.’
Alas…On May 14th 1748, John, his 3 brothers, their tutor and a boatman, set off across the voe to visit relatives at Wethersta on the other side, it was a fine, calm evening. The next day when they had not returned, frantic search parties were sent out, and eventually the boat was found, upright, with John’s hat and stick still in it. Of the 6 men there was no trace. At last the bodies of John Gifford and the tutor were dredged up, though none of the others were ever discovered. And so John came to be laid, dead, at his mother’s feet.
Barbara Pitcairn then went to the Giffords and told them that she and John had been secretly married some months ago, and that she was expecting his child. If she hoped that this news would alleviate the loss of all their sons she was disappointed. They refused to acknowledge that a marriage had taken place, although when the child, a boy, was born both grandparents took to him at once and decided to bring him up as their heir. He was christened Gideon.
But they never forgave Barbara, and as she was a spirited young lady it was not long before she and Lady Gifford had their final quarrel and Barbara was sent packing to live in Lerwick – in those days a 14 hour boat journey away. Gideon was kept at Busta House to be brought up as a gentleman, and his mother only saw him once more, when he was 7 years old. She died aged only 35, and there can be no doubt that she died grieving, she had been cruelly treated. Perhaps that is why her ghost returns as she could not to look for her son or even for her lover.
The house was eventually bought in the 1950’s by Sir Basil Neven Spence, another Shetland landowner. He was Lord Lieutenant of Shetland and a Member of Parliament, as a result of which occupation he was able to rescue and bring to Shetland some gargoyles from the House of Commons in London, which, damaged by wartime bombing were being discarded during renovation work . These gargoyles are still in the gardens of Busta House, staring blankly out over the sea, where the four sons of Thomas and Elizabeth met their deaths on a calm May evening. As for Barbara, she still haunts the old house searching for her son Gideon and is frequently seen by guests.

at the back o Bennachie”   (Scottish Folk Song) 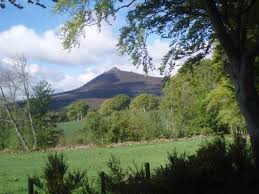 under a bonny-berried rowan tree

that scares away the  witches

I came across the skeleton of a deer,

poking through its weather-bleached  ribcage,

and it put me in mind

of one of Norman MacCaig’s wee poems

so when I got home

I looked it up

but it wasn’t it at all,

no, the poem I had in mind