“Should Scotland be an independent country?”

“Should Scotland be an independent country?” 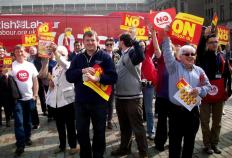 Edinburgh Festival time: a pavement artist recreating Vermeer outside the National Art Gallery in Princes Street, both the milkmaid and the artist fully concentrated on what they were doing

which led me to have a closer look at Vermeer’s woman pouring milk….there’s such a natural grace and rightness in the way she is pictured- it all seems in the natural order of things

which reminded me of a photo by Bill Brandt of a woman cleaning a doorstep, kneeling, twisting the cloth to squeeze out the dirty water into a basin the way women do – men for some reason would ‘rotate’ the cloth in the opposite direction – body slightly turned away, head tilted but not looking at what her hands are doing…..Probably a political photo attacking the exploitation of  workers  but also a striking photo in an artistic way……All this I remembered  from seeing the b & w photograph years and years ago. I thought there must be other photographers who captured the natural grace  of women going about household tasks as opposed to the strength of men at work – miners, farmers, labourers etc.

Found her – thanks to omniscient Google – just as I remembered her. And how similar is her ‘configuration’ to Vermeer’s milkmaid!  Except that the milkmaid is watching what she’s doing; the housemaid looks away as if her mind is on other things. And of course leaning forward as opposed to leaning back, kneeling down as opposed to standing up, slim as opposed to solid, warm colours as opposed to cold blacks and greys…..

Why is she usually referred to as Maggie Thatcher?

Anyhow the day of her funeral

skiing to the South Pole

as if nothing was happening

Down from the castle
down past St Giles
towering over the masses
ever mindful of their mission
led by their strutting Italian drummer
tatatarat tatatarat tatatarat  tatat
the 3 wild witches
rattling their rattles
Make way! Make way!
stride over the cobbles
down the Royal Mile
glide down to  the Palace
bringing  the great news
first to  brave  Edwin
the proud nation’s defender
then to his mother
then to all the good people
of Edwin’s fair city.

Once upon a long time ago, I was wandering through Ireland and I came to the monastery Joyce wrote about in “The Dead” …..Mont-somethingorother. It’ll come back to me.* Anyhow I stayed there over a weekend – a spartan room, very simple meals, no-one to talk to except the priest/monk who had the dispensation to talk. My fellow lodgers were, for Ireland, unusually untalkative. However it was a very peaceful sojourn and did my soul and heart no harm at all.
* [Mount Melleray Abbey is  a community of  Cistercian (Trappist) monks.  The monastery is situated on the slopes of the Knockmealdown mountains in County Waterford, Ireland.]
The outstanding memory I have of Mount Melleray is of sitting on my bed looking out of the window across the sunlit garden at the very ornate wooden dovecot in the centre of the lawn – a single pole supporting a circular platform in the middle of which was a large ‘house’ with two arched doorways. A half-dozen or so pearly-white, puffed-up doves gingerly moved around their not-so-little platform, entering and exiting their rather grand castle, nodding politely and  making gentle sounds of satisfaction to each other as they did so – all very civilised, very French aristocrat

looking down from the surrounding grey granite ramparts of the monastery and making ugly guttural croaking sounds was a  ragged legion of black crows, very Irish peasant. The doves seemed oblivious of these creatures crowding the ramparts; the crows seemed to have little else on their minds but a sense of  the injustice of it all. And that’s how it was intended, 0r so it seemed, by some hidden law: the doves in custom-built comfort, the crows outlawed to the outskirts

a solitary crow launched itself from the ramparts and landed awkwardly on the doves’ circular walkway. The doves on either side moved hurriedly away, not a panicky retreat, rather the moving away from an unwelcome newcomer with whom they wanted no contact whatsoever

another crow made a bumpy landing, this time with some excuse because it had in its beak a long twig which it carefully and cleverly, to the startled cooings and uneasy shufflings of the doves, inserted in one of the arched doorways. The doves edged closer together, the two crows, without a struggle gained free access to at least a third of the circular board. The crows cawed loudly, the doves cooed softly

a door opened and a monk carrying two pails appeared. He put the pails down to shut the door behind him. Another crow descended, landed, inserted its twig.  Before taking up his pails, the monk clapped his hands. Clap clap clap. With a leathery flapping of wings and more cawcawing, the crows retreated en masse back to the dreary ramparts, the monk crossed the tonsured lawn with his shiny pails on his way to the vegetable garden, pausing only to pull the twigs from the doorway of the doves’ house, the doves once more occupying the full circle of their walkway with space to spare, once more nodding and making gentle sounds of satisfaction to one another.

The ungainly crows  on the ramparts hopped restlessly from one perch to another, cawing, waiting.

Church, State, Nobles, Peasants – it was all there – the history of Ireland in a monastery garden.

And Schubert. What shall I say of Schubert? That he taught me to turn a deaf ear to tittle-tattle? That he told  really funny jokes? That he must have done something wrong? Only that last one, I’m afraid, only that last one was true. But his jokes weren’t too bad either:
” When he was at the airport it occurred to Peter that  Gertrude, his usually reliable neighbour, hadn’t come round for the dog. He tried calling her on her mobile  every day but got no reply. And when he got back, a fortnight later,  what did he see waiting for him on the doorstep? “And of course you say, ‘the dog’,  and he says, “  The 14 bottles of milk he had forgotten to cancel.”
That was one of his jokes. Not really funny? Perhaps it’s the way I write them. They were certainly funny the way he told them. Wry. Dry. He was fond of one-liners, he was good at them – Did you hear about the dyslexic guy who walked into a bra?
He could rattle off a dozen or so in the time it took you to down your pint.

So I asked the man if I could join his aerobics team and he said it depends how flexible you are and I told him I couldn’t make Tuesdays.
We all had composers’ names: I was Mozart; my London contact was Bizet even though she was a woman. Blond. Big-boned. Wagner would have suited her better.
Where  did I meet Schubert for the last time?  Oddly enough at midday under that outlandishly huge astronomical clock in the main square with all the tourists waiting for the clockwork Jesus. Noon or midnight were the real treats when Jesus popped out followed by all his faithful, brown-robed disciples. People applauded as if they were real characters.
As usual Schubert was late, not that that worried him in the slightest. He never apologised however late he was, never explained what had kept him, just breezed in with some joke that made you smile.
When I left home, my mum said: “Don’t forget to write.” I  remember thinking: “That’s unlikely – it’s a basic skill, isn’t it?”
We were taken by Schubert  to the sleepy little town of  Strakovica  where we picked up Sibelius (and where Stevenson got the idea for Markheim, his short story about a murdered watch maker). We had a beer at Ticktalk’s, the pavement cafe which had formerly been the shop of the unfortunate watchmaker (whose murderer was never found). The sun was shining but it was cold enough for Schubert to put on his big black overcoat.
After that we went on to the very stylish glass and chrome building in the town centre where I was to give my lecture, a strangely transparent place for such secret shenanigans. At the ornate glass door, Schubert put an arm round my shoulders and said, ” If I don’t see you through the week, I’ll see you through the window,” his last and by no means his best joke.
I never saw him again.

There are so many reports

or for no reason at all

that you can sit on a bus

on the floor or wherever

put  their feet up

swear at each other

shout through and across you

in case they take offence.

See the auld fowk on the bus, man,

or starin oot o  the windows

at  life  passin them by.

that’s whit they are,