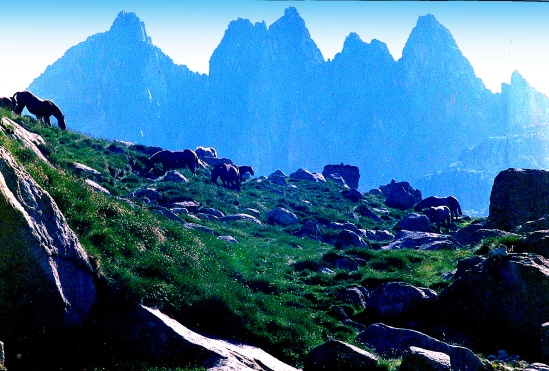 When I was  asked,  “Where are you off to this summer?”  out of the blue the exchange from Waiting For Godot crossed my mind so I said “I’ve always wanted to wander in the Pyrenees” and having made this destination public felt bound to live up to it.
So.
I got the overnight bus to London, the train to Dover, the ferry to Calais then by taxi, train, bus, train, bus  and hitchhike to Caldes de  Boi then uphill by foot after foot to the  Estany Negre with wild horses in the foreground and the distant blue peaks of Els Encantats (?) towering in the background.
Here I was at last, in the Park of  Swirling Waters,  Aiguestortes,  in the Pyrenees,  where I’d always wanted to wander.
Thanks be to Samuel Beckett.

( On the way back, at Santander, taking photographs behind the cafe at the ferry terminal – the PELIGRO  sign obscured by a parked van –  I was savaged by a couple of Alsatians. One on each ankle.  Impressive inartistic scars and a few photographs to show for it all .
But that’s life for you. ) 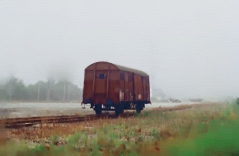 Lonely as a truck on a siding in the Czech Republic

Miserable as a  Glasgow beggar in the rain 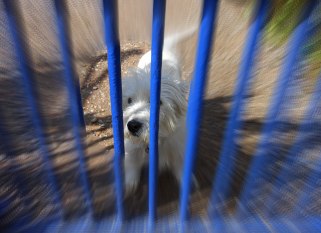 Friendly as a tail-wagging terrier behind bars in Blairgowrie 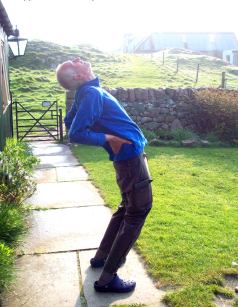 Lithe as an early-riser in Iona

Empty as the main Street in Stromness

Happy as a Festival crowd in Edinburgh


Notice in a student kitchen: 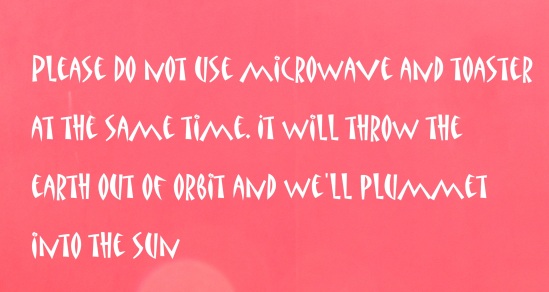 The indignant voice of John Knox lives on in Edinburgh:

A Glasgow road sign no doubt trampled underfoot in the rush:

Dull is a small, one-street village in Perthshire on the North side of the river Tay; Boring, in Oregon, has a population of 8,000. They got together in 2012. 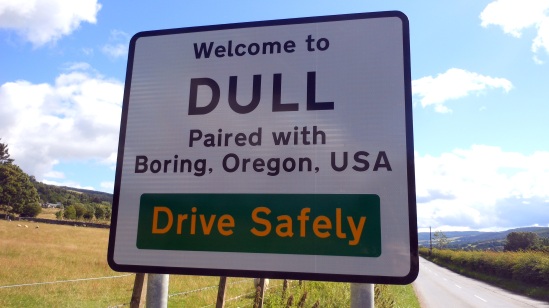 I came across this existential/defiant/plaintive fading statement on a wall in France:

A plaque on the wall of a house in Lerwick, Shetland: 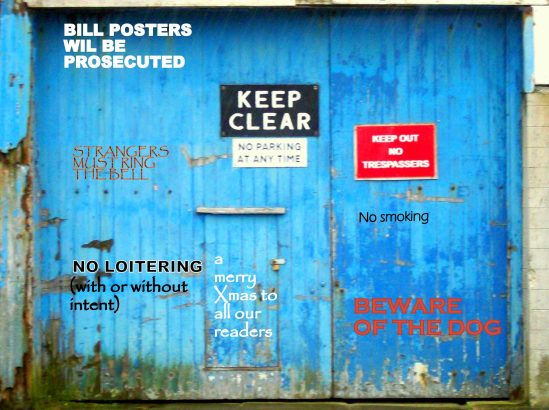 An Asian alleyway in Lerwick, Shetland:

This guy in Arrecife for starters, very relaxed, leaning nonchalantly against a white wall rubbed out by the heat, dressed and sandalled for coolness and comfort,  listening not looking, focused  on his own cyberworld;

and this woman, man, baby, not so relaxed, tense 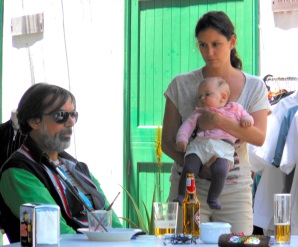 he’s an artist (the two cruciform paint brushes in the jar), vivid clothes (compared to her and the baby’s pastel colours), growing a beard or perhaps just unshaven, seated in a slumped sort of way, looking straight ahead(thinking, moody, angry), not looking at his wife  or his baby, hidden but not hiding behind his sunglasses, ignoring them both, aggrieved while she is patiently waiting for some  sort of reply/response, firmly protectively grasping her/his baby, leaning slightly away from him, not angry, not apprehensive, a kind, gently, long-suffering face, Madonnaish and the half-empty (half-full) glasses of beer and why is she standing, he sitting and who/what is the baby looking at….. has there been a quarrel, has she just left the table or has she just arrived on the scene?…We’ll never know. and this little Spanish girl

I was a bit apprehensive about photographing her but what was she carrying in her hands, was she running from or to someone or just burning off excess energy? Spanish kids are left to their own devices in public but seldom seem to create problems for their laid-back parents… 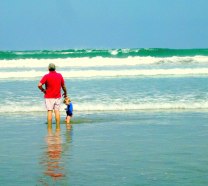 On the beach at Famara, grandfather and grandson see the sea in different ways – the grandfather trying to remember something from the past that the relentless waves bring to his mind, the grandson focused on the immediate present

Last week we went to India so I could photograph her with The Taj Mahal in the background.  The Taj Mahal looked  wonderfully grand, touched with pink by the setting sun and framed by majestic palm trees. It brought to mind that wonderful photograph of red-jacketed Princes Di  seated primly on the little wall  in front of the oblongs of water with this magnificent pristine building behind her not quite managing to put her in the shade. People have often remarked when I show them my photographs that my Amelia has a touch of Diana about her, the eyes mainly I think, the way she lowers her gaze at times.She is too beautiful for words.

My photograph of Amelia in front of  the Matterhorn, cheeks aglow with the cold. eyes sparkling, head slightly tilted, is another that people seem to like but my own favourite is of Amelia against the background of The Victoria Falls, not just because I have managed to catch little ribbons of  rainbows in the spray behind her with the water seeming to hang in the air like smoke but mainly because I seem to have finally captured that little smile of hers that I think is every bit as enigmatic and beautiful  as the Mona Lisa’s.

The one Amelia likes best is of her outside Buckingham Palace where the Queen and Prince Philip waited patiently till I had taken the photograph before passing between us.

aw dat movin an hidin an listenin an warnin,

Or so we thocht .

Nooadays A cannae even see

No dat A expect der tae be. 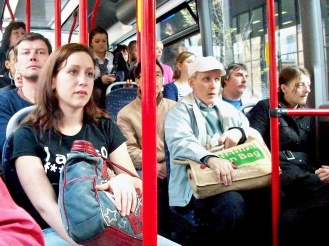 Very African,
fun to sing
fun to listen to
fun to dance to,
living in the present,
optimistic.

Signior Antonio, many a time and oft
In the Rialto you have rated me
About my moneys and my usances:
Still have I borne it with a patient shrug,
For sufferance is the badge of all our tribe.
You call me misbeliever, cut-throat dog,
And spit upon my Jewish gaberdine,
And all for use of that which is mine own.
Well then, it now appears you need my help:
Go to, then; you come to me, and you say
‘Shylock, we would have moneys:’ you say so;
You, that did void your rheum upon my beard
And foot me as you spurn a stranger cur
Over your threshold: moneys is your suit
What should I say to you? Should I not say
‘Hath a dog money? is it possible
A cur can lend three thousand ducats?’ Or
Shall I bend low and in a bondman’s key,
With bated breath and whispering humbleness, Say this;
‘Fair sir, you spit on me on Wednesday last;
You spurn’d me such a day; another time
You call’d me dog; and for these courtesies
I’ll lend you thus much moneys’?

Ben’s bootlace has come undone. Ben is a bouncer. Ben and Amalia live in a flat in King Street. Amalia is a nurse. She is from Portugal. Ben is finding it difficult to tie his bootlace because he is fat. He is a very popular fellow. He makes people laugh because he has a sense of humour. He is also a very good dancer. Amalia and Ben are very happy together. They have a son called Donald. Donald is three years old and is bright as a button. Donald is also the name of Ben’s daddy. Ben’s daddy  is a fisherman. He has a funny way of talking. He calls ‘fish’ ‘feesh’. Ben and Amalia go once a year to Portugal for a fortnight. They like it very much there. It is beautiful and the people are very kind to them and Amalia is so happy to be ‘home’ again.

Trev is a labrador. Trev has 2 sisters and one brother. He is owned by Amalia and Ben but when Amalia and Ben are working or on holiday Trev is looked after by Tracy. Trev is very fond of Tracy and Tracy is very fond of Trev. When Trev sees Tracy his tail wags like mad. He wants so much to please. You can see it in his eyes. Most of all Trev is fond of Donald. Trev is very patient with Donald. They play together. Donald throws away his ball and Trev runs after it and brings it back and drops it at Donald’s feet. He sits and wags his tail and waits. Donald throws the ball again. He laughs and claps his little hands as Trev brings the ball back and drops it at his feet. They never grow tired of playing this game with each other. Trev is Donald’s best friend. Donald tells him things. I like ice-cream, Donald says and Trev listens, fascinated.

Donald is at his happiest in Portugal. Portugal is sea and sun and donkeys and waking up early and running down to the beach and oranges. He feels sad when he thinks of Trev then other things crowd out  his little mind, like ‘Why do people think I’m a girl?’ and ‘Why did I have to eat that horrible fish?’ and ‘Will they let me go out in the boat?’ and ‘Trash osh montsh  – what does that mean?
So many questions, so many unanswered questions….. 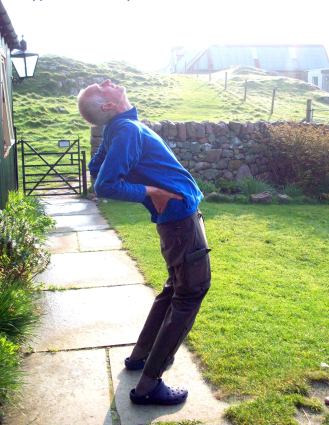 It is 6 am  and Donald is bending over backwards to greet the sun. Donald who used to have a boat now has a croft. Instead of herring and mackerel and cod he now has hens and ducks and sheep. And a horse. It is a hard life but it is what he is used to. He has no wife to share things with but that doesn’t bother him. He has grown used to his own company over the years, doesn’t like it much but has grown used to it.

Donald’s horse hasn’t got a name. Crofters don’t do animal names but