Some smart-ass has been fooling around with this photo and if I knew how to I would erase the witless text but anyhow this is the house where I was born and where I spent the first dozen years of my  sadly short life.  We were poor and often went without but I can’t  recall ever being unhappy. Hungry, yes, but unhappy, no.

Even the yearly gathering of the stones was good fun in its way –  hard work, yes,  but after we and our neighbours had finished and  had  all linked arms round the cairn  to sing the Ingatherin song, we would troop off home still arm-in-arm for the big meal and more singing and dancing.  It was always  a memorable day. And night.
But it was hard work. My father diligently farmed the harsh land between the house and the sea,  giving up more and more of his time to the ungrateful fields,  less and less to his impoverished family. Unlike his Ayrshire  counterpart however, one day the coulter of his plough threw up something a bit more valuable than a wee mouse nest – a larchwood chest containing a dozen Celtic brooches,  five rings, a couple of bracelets and the jaw bone of a porpoise. We all stood looking down at the opened box, our mouths as open as the box then  mother began to cry but not unhappy tears and father just looked at the shiny gold ornaments and shook his head then looked at us all and grinned his big grin and shook his head a bit more.
With the money he eventually got for that miraculous find, we all left Gartwick, a move about which I had mixed feelings –  leaving my best friend Callum and the hens and the pony and the fishing was only partly made up for by ( can I use 3 prepositions together like that? Anyway I have!) the excitement of  the moving to someplace new,  someplace I’d just read about.  New York.
Only I never got there. Just before we left I went down to the sea to, I suppose, bid some sort of farewell to all the good times I’d had, and

There was this net from the mouth of the burn out into the loch (strictly illegal) and caught up at one end of it was a cormorant. I took the boat out to free the cormorant and on the way saw a salmon hanging from the net. Freeing the cormorant was tricky: it flapped about, getting itself more and more entangled in the meshes and taking quick frantic peck at my hands and wrists whenever it could.  Then off it went, at last, not a word of thanks.

I grabbed the net and pulled it up the side of the boat – in retrospect I grimace at my  stupidity – and as I lent over the side to grab it, unlike the cormorant, it slid quietly out of its retraining mesh and like a falling leaf  gently descended the dozen feet to the sandy bottom of the loch

What to do?  The obvious thing was to dive in, swim to the bottom, get a grip on the fish by its gills, clamber back aboard, holding he fish aloft, triumphant. But it was like how you see it in cartoons – I dived in and came straight out again – the water was ice-cold, unbelievably cold.

But there was the silvery salmon still, tantalisingly in sight if not in reach.

I had a gaff in the shed. I cut a hazel branch (not a good choice as I was to find out – too flexible), tied on the gaff, and armed with my 12 foot hook got into the boat once more and rowed out to where the salmon had been. It was still there. Keeping the boat in position with one oar, I directed my rod-and-hook down, down, down…..it was tricky. The water of course refracted the stick, the underwater current deflected it, having only one free arm to work with – all made it maddeningly difficult. Not that it was simple in the first place. What I had to do was to insert the gaff hook into the salmon’s gills; the rest, the lifting it up and out was the easy part (or so I thought ).

By this time I was cold, wet, irritated, cramped, blistered, cut but determined. Then Hurrah! (as they used to say). The point of the gaff found the entry to a gill and this time didn’t slip away but slid in. And that was it! Success!

Gingerly I levered the fish off the bottom of the loch, expecting it at any moment to slide off the hook and silently return to the depths from whence it came….. 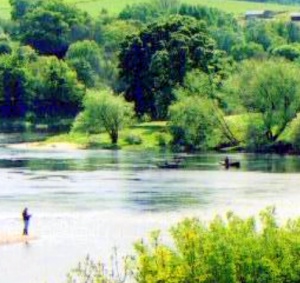 The peace and calm of  this scene reminds me 0f  one of Corot’s paintings. What goes on inside a  fisherman’s head as he  gazes over the water, waiting for his line to suddenly tighten and  snatch him out of his  reverie?

Hard to imagine  black  thoughts in such a  green  place.

I didn’t like Tunisians  overmuch  –  a land of obsessive carper-sellers, hostile students, children  no doubt sent out by destitute parents but nevertheless children who wouldn’t take no for an answer

and no doubt the Tunisians didn’t like me/us very much either. 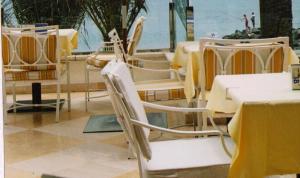